NOTE: Sunday’s event has been canceled due to the storm in the Gulf of Mexico.

Two events will transform the waterfront of downtown St. Petersburg into a festival of science on Saturday.

The annual St. Petersburg Science Festival will be held in conjunction with MarineQuest, an open house for the Fish and Wildlife Research Institute (FWRI) and thousands of children are expected to attend.

Organizers said they hope to inspire the next generation of scientists.

“Our exhibits give people the opportunity to experience the wonder and excitement and curiosity that science engenders in all of us,” said Theresa Burress, co-chair of the St. Petersburg Science Festival, which is held on the University of South Florida’s St. Petersburg campus. MarineQuest is held next door at FWRI.

This year’s festival includes a new exhibit, “This is What a Scientist Looks Like,” featuring young people in science, technology, engineering, and math (STEM) talking about their interests and experiences.

“Today’s STEM professionals are young, possessing diverse backgrounds,” said Alison Barlow, director of St. Petersburg’s Innovation District and co-chair of the science festival. “It is imperative that we introduce children to STEM opportunities and provide access to explore possible careers.”

Institutions like the Florida Aquarium, the Dali Museum, and NASA will host more than 150 hands-on exhibits, with many focusing on the possibilities of STEM in art, such as glass blowing.

“Creativity is a huge part of science that I think is under represented,” Burress said.  “It is all flavors of learning, experiencing, curiosity, and wonder and exploring the science behind that.”

The science festival is on its ninth year and MarineQuest is celebrating its 25th year.

“MarineQuest was originally created to celebrate the 40th birthday of the then Department of Environmental Protection’s Florida Marine Research Institute,” said Michelle Kerr, spokesperson for the FWC. “We’re celebrating the preservation, protection, and conservation efforts of Florida’s marine environment as well as wildlife research.”

Kerr said their partnership with the science festival has truly made this a community-wide event, averaging 15,000 to 20,000 attendees each year.

More than 800 students from local elementary schools will get a sneak peek of some of the exhibits on Friday.

“We want to inspire our next generation of scientists and researchers and professionals,” Burress said. 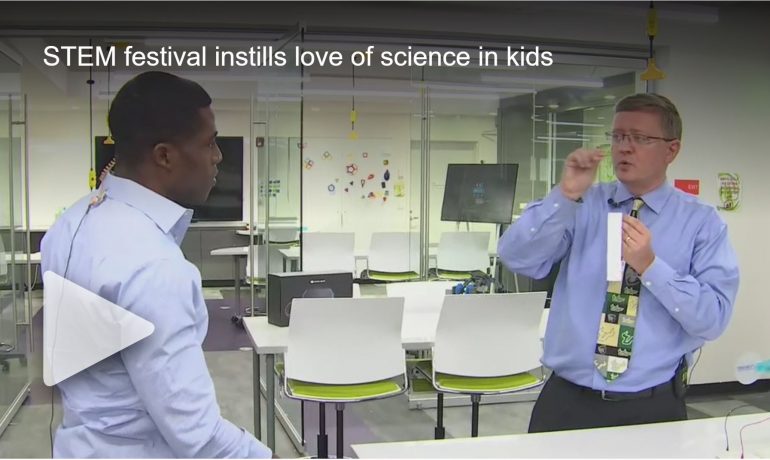 The annual festival will also focus on diversity in